The Olympic Torch Arrives in the UK

The Olympic Torch will be arriving in the U.K. on the 18th May and then will begin its 70 day relay. Over 1000 cities throughout the country will be visited by the Torch, and it will be carried by 8000 bearers.
The Torchbearers are all U.K. citizens, chosen for their exceptional and inspirational stories and achievements. They are everyday people who have achieved something spectacular or overcome impossible odds; from philanthropists to survivors to local heroes.

It's only two months to go until the start of the 2012 Olympic Games in London. The opening ceremony will kick off on 27th July, with Archery beginning the same day. Here follows a brief break-down of the schedule for some of the most popular events:

Getting To The London 2012 Games

If you are visiting the Games and are unfamiliar with London, it is highly advisable to plan your journey well ahead of time. The Olympic Stadium and Village are located on the edge of Hackney Wick, in Stratford within the London Borough of Tower Hamlets. Travel to this part of London is easy - there are a range of transport links - but public transport will be exceptionally busy throughout the Games. There are two main routes to get to the Stadium using London's public transport:

It is recommended that visitors allow 2.5 hours to get through the Stadium's airport style security. Tickets will allow entry to the Stadium two hours ahead of any given event. ALWAYS plan ahead and allow plenty of time for travel. Transport links will be very busy and the area surrounding the Stadium will be crowded.
It is recommended to avoid bringing bags into football venues if possible, because this will be subject to additional checks and queuing. All venues have restrictions on bags, which MUST be soft sided and small enough to fit under seats or on laps. Bottles containing liquids of any size are also prohibited.
Upon your arrival at the Games, specially trained Game Makers will be on hand to answer any questions and assist visitors to their seats. Having been selected from over 100,000 applicants the Game Makers (visible by their bright blue uniforms) have all attended numerous training sessions - they can answer all kinds of questions, from 'How do I get to my seat?' to 'What's a number for a local taxi company?' or 'Where can I get Halal food?'

With a cast of over 1,500 performers, the 2012 London Olympics Ceremony has an expected audience of four billion. All eyes really will be on London on 27th July. Danny Boyle (director of famous British films such as Trainspotting and Slumdog Millionaire) is the Artistic Director for this year's opening ceremony.

Every ceremony must include certain traditional events, the order of events during the opening ceremony will be:

Brief History of the Olympic Games

According to Greek legend, the Olympics were originally founded by the great Hercules, son of Zeus, and his mighty strength made him the ultimate Olympian. Certainly in historical records, the Olympic Games can be dated back as far as 776 BC. The very first Olympic games had only one event - the 200 meter sprint. In 776 BC a runner named Coroebus (a cook by trade) won the sprint and therefore became the first ever Olympian on record. At the first Games, all competitors were required to run completely naked; back then only men were permitted to compete and this was seen as a sure-fire way to prevent women from sneaking in! The Games continued until 393 AD, when Christian Roman Emperor Theodosius banned the Games as a Pagan practice.

The Games remained on hiatus for almost 1500 years, until French aristocrat Pierre de Coubertin, after a struggle with numerous cynics, finally managed to get the Games running again. Part of his campaign to revive the Games included an inspirational speech, where he made the call:
'Let us export our oursmen, our runners, our fencers into other lands. That is the true Free Trade of the future.'

Finally, in the summer of 1896, the first modern Games were held in Athens and the Olympic Games as we know them today were born. 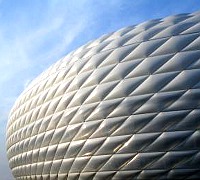